REALME Q3 series will be released soon! Challenge the strongest performance at the same price

Although it hasn't been long since its establishment, the "rising star" Realme has achieved very good results: global sales of more than 50 million units are the fastest smartphone brand to reach 50 million sales. In addition, realme users have exceeded 70 million. Since 2018, Realme has brought us many mobile phones, all of which have been welcomed by consumers. Among them, the "surprise leapfrog" class represents the sales volume of the Q series has exceeded one million. On April 15, Realme officially announced that the next-generation Q series-the Q3 series will debut soon. 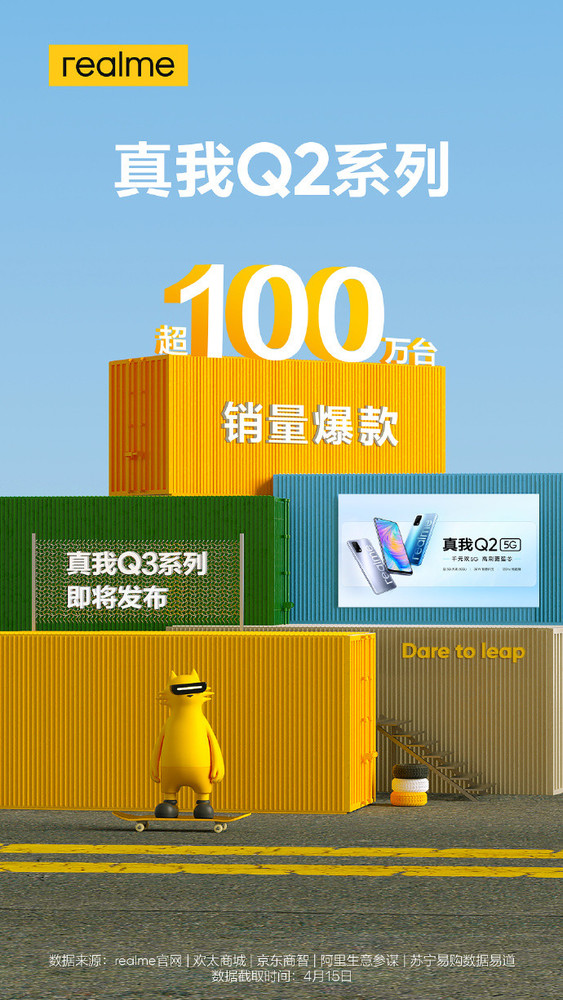 According to Xu Qi, the vice president of realme, the Realme Q series is the representative of the "surprise leapfrog" class. After the first generation is released, it has become synonymous with "true fragrance". Realme Q2 launched the Dimensity 800U processor for the first time in the world, and the Realme Q2 Pro is the first time that the original belt is in the thousand yuan price range. The overall praise rate of the Realme Q2 series has exceeded 98% within 6 months of its launch, and the entire network has sold over 1 million units. Strong core, screen, battery life, light and thin body, fashionable appearance, the new machine with a full range of true fragrance leapfrog configuration, dominate the major e-commerce platforms.

According to the official introduction, the mission of the Realme Q series is to create the most powerful mobile phones at the same price for young people: the flagship configuration is decentralized, allowing young people to enjoy leapfrog technological fun; innovative design for fun and fun; allowing young people to show their unique trend personality. Realme Q3 is about to debut, and will challenge the strongest performance at the same price. Let us wait and see!

PREVIOUS：New renderings of Xiaomi MIX4 exposed. Netizen: This is the MIX in my mind NEXT：Millet MIX FOLD, the flagship of 10,000 yuan, hits the first sale: 1 minute sales break 400 million yuan